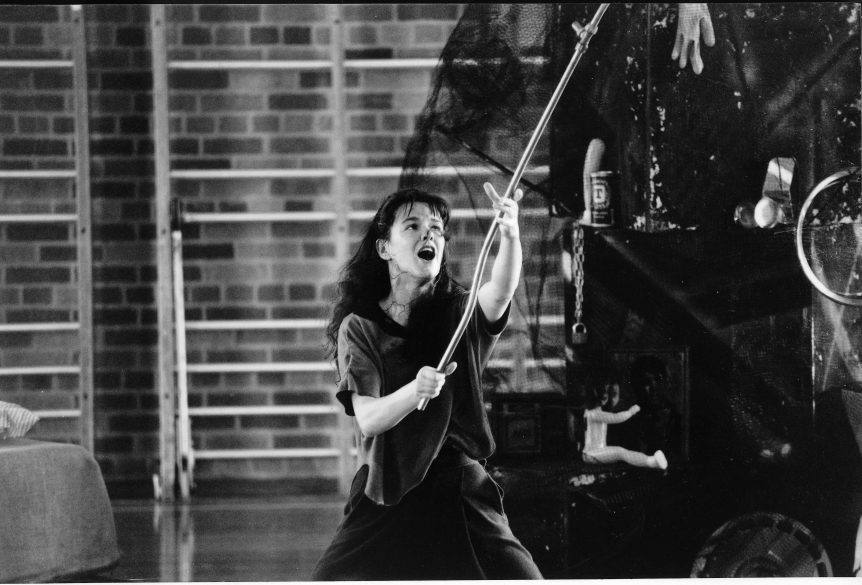 Peter was a wordsmith, a term I wouldn’t have used when I first met him, but I think best describes how he worked with words in performance. This is what I mostly remember about him: his love of words, the muscularity of his writing, his belief in the importance and uniqueness of the writer’s voice and his ability to infuse his faith and concern for social action and justice into his writing.

I first met Peter in Bedfordshire in 1986 at a week-long theatre training event organised by Theatreworks Ltd, a Christian arts organisation led by Nigel Stewart. I was a school teacher and at the very beginning of my voyage into professional theatre making and performance at the tender age of 29.

The other early memory I have of Peter was his profound reaction to a female solo performance that made a very deep impression on me at that same training event.  ‘Quest’ performed by Peri Aston explored aspects of the triple Goddess in myth and history addressing notions of pantheism that to me, a committed Christian at that time, awakened something quite profound. Peter and I had very different reactions to that work and therein ensued a healthy dialogue between us. We were singing from different pages of a hymn sheet but what ensued was very nurturing I think as I ponder our creative relationship.

A second encounter with Peter led to us officially working together. Nigel Stewart with whom I had  been learning the beginnings of a body-based performance practice suggested Peter as a writer for ‘The Fairy Tale Project’, a theatre-in-education programme we were creating between 1988 and 1989. The performance element of this became ‘Omega and the Golden Water’. Peter wrote the story/script after a series of development workshops facilitated by Nigel. Nigel directed the performance, James Lantsbery composed the music and Gareth Knowles designed the show. ‘Omega and the Golden Water’ was the first project I produced, co-created and performed. Peter and the others generously supported the project, worked for a pittance on a labour of love that meant ‘Omega’ was performed at the Edinburgh Festival touring schools, colleges and arts centres in the UK for almost two years.  This fledgling work formed the pathway Triangle was to take in subsequent years.

The work on ‘Omega’ launched the company and was instrumental in securing funding support for a second project ‘Married Blitz’ an intergenerational theatre based project for which Peter also developed the spoken text. ‘Married Blitz’ became a part verbatim performance with accompanying workshop programme touring internationally winning two awards in Volgograd, Russia. Ian Cameron directed marking a move from purely scripted work to a different way of working with a writer that was both challenging and salutary.

Peter’s work on ‘Married Blitz’ in turn secured support and interest in the work for the third performance ‘The Dig’ which marked another departure for Triangle from script-driven performance to a wholly devised approach to theatre making.

Both the ‘Omega’ and ‘Married Blitz’ productions represent the huge contribution Peter made to the early development of Triangle Theatre. In the Triangle laboratory, a lengthy 3-month process, Peter was patient, supportive and insistent.   We had many intense discussions about the role of the writer and the how the writer sits within a devising process. I remember how gracious he was when we threw out his first draft and he laughed about the ‘poetic tosh’ he said he had written. The second, third and subsequent drafts involved painstaking study of the hours of interviews we had conducted representing eye-witness accounts and personal recollections of the Coventry Blitz, including his mother’s account of her war experience in Northampton.  These he lovingly wove into what finally became the performance text for ‘Married Blitz’. Peter’s work formed the beginning of a move for the company into autobiographical performance, much of the text and visual montage concerning the accounts of my own relatives, particularly from Coventry and Bedworth.

The deeply personal recollections of those many tragic stories found their way into the character and life of Gwen Williams who in turn, many years later, formed my Mrs Williams character. She led along with Mr Whissell (aka Richard Talbot) the award-winning ‘Coventry Kids in the Blitz’ project along with the other pieces: ‘Dugout!’, ‘The Whissell and Williams Homefront Training Camp’ and ‘War is Over’. The legacy of ‘Married Blitz’, and in turn Peter’s work, lives on through those projects and the retrospective work created through the DVD – ‘Triangle’s Work In Times Of War’ (2007) which featured footage from the original show and some of the research materials.

Peter and I had always wanted to resurrect ‘Married Blitz’ but unfortunately this never came about but we did correspond over the possibility a number of times along with other tentative discussions of further work especially in respect of the peace and reconciliation work of Coventry Cathedral. Re-reading some of his emails I am deeply moved by the way he signed off as “your friend”.  I am sorry that I was not able to follow up the possibility of working together again and it will remain a regret.

Something I wrote a long while back about ‘Omega’ and ‘Married Blitz’:

“For me Omega and the Golden Water, was set in Almond Tree Avenue, Coventry where I used to live. Its world was the brook, the council estate, the canal and the cloggy banks where I played at ‘The Sound of Music’. It was set also a bit further afield by the factory where my brother worked not far from  Lyng Hall School which I attended between 1968 and 1975.

It was about a girl who didn’t fit in, a moody fag-smoking father, an absent mother and a wayward brother. Its creation represented a tussle with authority – author-ity.

If you can write it down, it’s in tablets of stone,  a legacy for heritage and history. If you stand and say it or make it, it’s gone with the wind and not even captured on video let alone in Technicolor.”

“Once upon a time, that is, as far away as your eyes can see and as close as the breath you breathe, there lived a man called Rafe Vicegrip.   He owned the factory of mirrors where neon lights shone sharp cutting the night air like the howls of the dog packs that roamed the fast food litter-wrapped streets of that place.”

Opening of ‘Omega and the Golden Water’, Peter Billingham (1989)

“I remember the wrestle with these words and what a struggle it was to meet them vocally and gesturally. I had been studying the Kathakali performance form from Kerela, South India. Nigel had encouraged the use of mudras within the piece which would sometimes remain as gestures and also become full body characterisations. This representation of character through hand gesture, facial expression and full body became integrated over the years into my performance methodology and has served me well. The slippage between characters has distinguished my work since.”

“One, two, three – a turquoise fish, a phoenix in flight, a fire burning gold in the depths of the night. Run through the streets to the path by the water. Only you can find freedom Omega, Earth daughter. Trust me and run!”

From ‘Omega and the Golden Water’, Peter Billingham (1989)

“Blood was running down the streets of Coventry. They’d got bodies everywhere. They were using churches, mortuaries, hospitals. She was there, it was pretty awful, she hadn’t a mark on her. She was walking home when she doubled back and she went into this Anderson shelter…….”

“As I walked through the rubble and the crying children on my way to work, I thought, it’s amazing that anything is left standing, I mean, as I crossed over the road there was a church. I mean, I’m not what you might call, religious, but there, I mean the cross on the roof, the cross was still there…still there.”

If you have read this and knew Peter and maybe want to donate in his memory you can follow this link:

Online links to both productions: